We have a brand new Samsung Galaxy A72, the Samsung phone you’d be buying if you wanted a high-end Samsung phone without paying over a thousand Rupees.

Surprisingly, this one’s less than half the price of the Samsung S21, yet it packs many of the same features, and the main specs of the Galaxy A72 are multiple cameras, a big display, 5000 mah battery, a slim phone, an elegant look and an IP67 water resistance rating. Overall an impressive specs sheet for a mid-range phone but in this post, we’re going to figure out what this phone is all about to decide whether or not this phone is as good as it claims to be.

So, there’s a lot to talk about; like I said, definitely an impressive phone on paper and just holding it in my hand, I could tell you it feels nice, even though it’s a plastic back phone which is to be expected for mid-range phones. I like how this phone feels. It feels really slim and really solid. As far as the back goes, I like that it’s a matte back; it’s easier to film for one.

We have 04 cameras at the back, but the camera bump is overall relatively slim. Maybe I’m being desensitized now with all the flagships.

So, Samsung nailed it and did a great job. As we see, a lot of other phones under 70,000 price range in Pakistan feel less premium. For example, the Apple iPhone SE 2020 has larger bezels, thicker phones, bigger camera bumps in one way or another. It feels more like a burden when you’re using it.

You can choose many different colours from Awesome White, Awesome violet, Awesome blue and Awesome black but the phone aesthetic. So, we have a slime phone with prissy colour combinations. 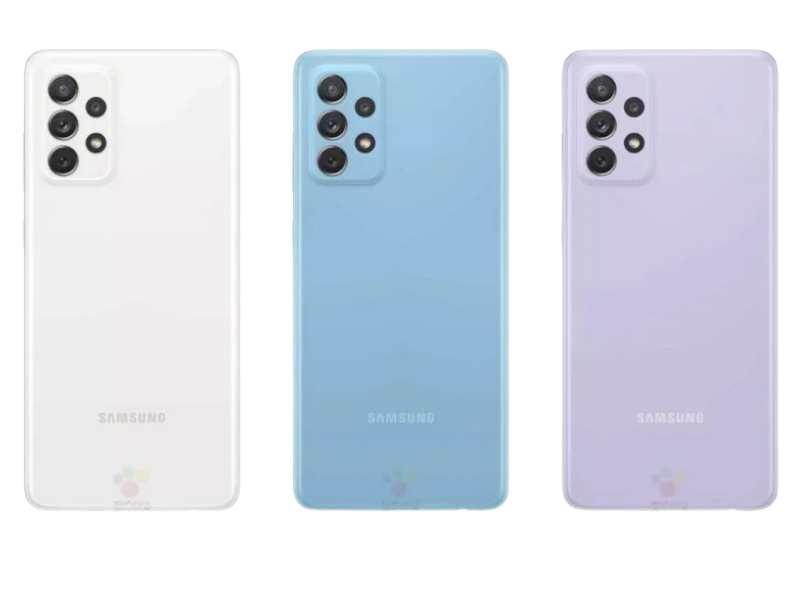 Samsung Galaxy A72 powered by a 5000 mAh battery and comes with a super-fast 25-Watt charger. So, that’s something that you do not even see in double phones, or you know even triple the price of this. Great to see that 25 Watts are not the fastest right now. So I wouldn’t call it super fast, but that’s what Samsung calls it, and it can charge this phone up reasonably quickly. You’re going to be getting a pretty solid battery life. It takes almost 1 hour and 26 minutes while charging with a 25-watt charger.

Samsung Galaxy A72 is a super AMOLED screen phone that means that it has an integrated touch function and protects the screen. Samsung dispatched a built-in Corning Gorilla Glass. A72 also comes with a screen protector pre-installed, which is great; you don’t have to buy one and try to place it yourself with bubbles. It’s great that they already did that. 90 HZ refresh rate is another key Spec of this phone. You have a full HD 6.7-inch big display, and in the world of mid-range phones, we have to choose like they pick and choose what they want to put in here. They can either make it a bulky phone or a cheap build but give it a good display or give it like the Google pixel 3A and 4A.

So, it is a relatively bright display; it’s 800 nits for reference; a lot of flagships around like 1200 nits, so they get brighter, but I mean, I’m able to see Galaxy A72 out in bright daylight with no issue and also the screen colours look great. Samsung, if there’s one thing they’re good at, it is making bright, colourful displays. That was no concern; we do have a bezel all the way around; as I said, I don’t care about that.

But some of the nice things with this phone that they advertised heavily at the launch were the Eye Saver. For one, the Eye Saver is supposed to be limiting the blue light; it’s something I always turn on with my other phones, and it’s nice that this phone does a pretty decent job of it.

Samsung Galaxy A72 still looks pretty normal, pretty natural; the colour balance is all really good even when you have that on, so I am impressed with that feature; at first, when I read it, I thought doesn’t don’t all the phones have that anyway but I see what they were talking about they did a decent job.

I want to talk about displaying the Galaxy A72 in-screen fingerprint sensor present at the bottom of the screen. I’ve been signing in and turning it off while writing, and I’ve been consistently getting in every single time no rejections and so even though it looks like the sensor is pretty small on the bottom, I’m impressed. I think overall, and it does a decent job.

I have no issues with that; the only thing is I wish it were a little bit higher up on the screen; I feel like I’m reaching my thumb down a little bit far for that, but maybe somebody who has smaller hands would have no problem with that, and that might be a great spot.

I like how far Samsung came with the fingerprint sensors; they used to be a complete headache, especially on the A-series, and something Samsung does especially well with the A series is they try to give you everything you need.

In 2021, the Samsung Galaxy A72 has a waterproof and dust resistance rating of IP67. It means you should be able to submerge, and it should be fine. I think IP67 rating means 1 meter underwater for 30 minutes or something like that.It means that if you drop this in a pool, it should be fine; if it gets rained on, it should be fine, like you shouldn’t have to worry nearly as much about water damaging this phone.

I would rather have a slim bezel around than what the iPhone has with the giant chunk on the top and bottom, but we do have a hole punch camera on the top for selfie camera. It’s a really small hole punch, and if you look closely, you can see a small metal ring when your screen is off; it does kind of flash you occasionally. So, I’m not sure why they add the little metal ring; it’s something that we saw last year in the Samsung A-series smartphones. 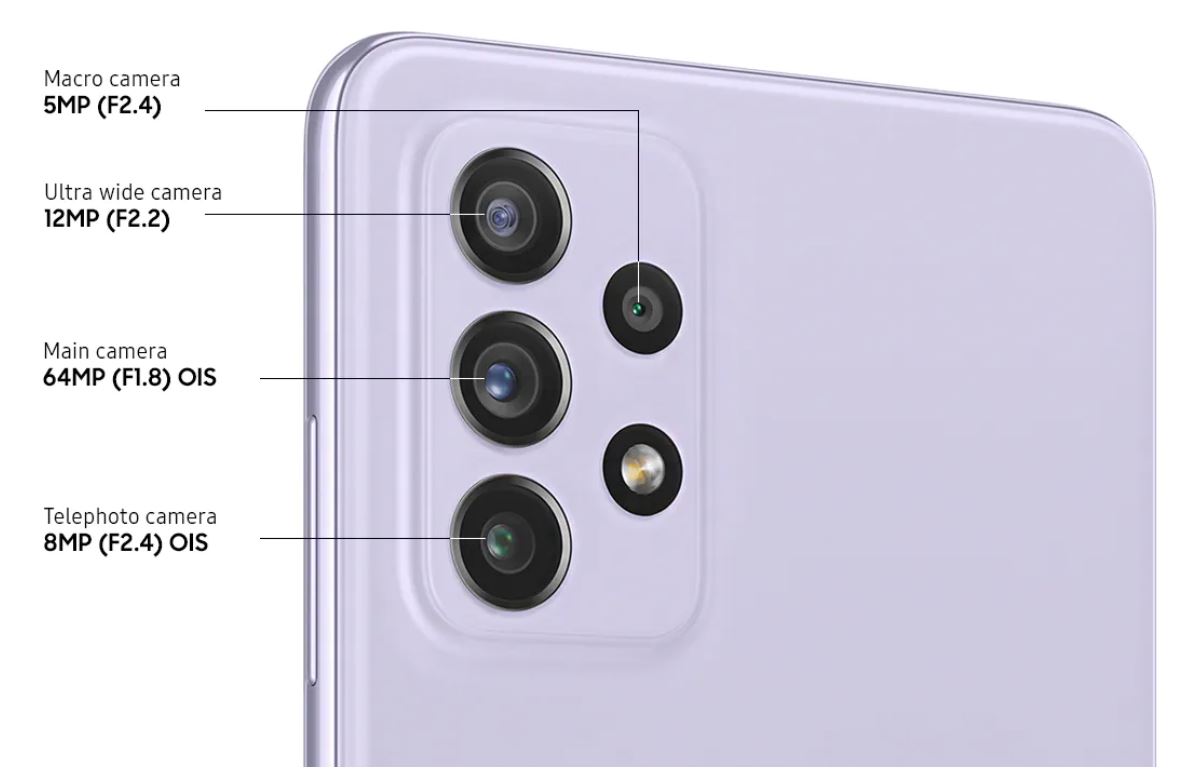 Let’s get into that, but something I want to mention first is that we have a 5-megapixel macro camera. I’m going to show you guys what it does, but of course, it’s a macro camera. I never get excited about those.

We have a 12-megapixel ultra-wide lens, a 64-megapixel main shooter, so your wide-angle lens has (OIS) optical image stabilization. It should be great for night photos and videos; it’s nice to have that. Honestly, the main camera does a fantastic job. If you give enough light, there’s a great colour, great brightness, great sharpness, very true to life colours. It looks great. The only thing is in lower light situations, sometimes get slightly over sharpened.

We also have an 8-megapixel telephoto lens which again also has (OIS) optical image stabilization which is even more important when you’re zooming in on something. If you don’t have OIS, it is really hard to take a video or a photo that’s not blurry or shaky. If you go in slightly lower light situations, I also notice that the dynamic range is not the best. But the ultrawide lens is a great colour with minimal distortion on the edges of the object.

And even the 3x optical zoom lens, even though it’s not the highest resolution, it still looks pretty good. When you zoom in to 10x, you’ll still have a very usable photo, a little bit on the noisy side as well. But a quick denoising filter would probably fix that and make it look decent.

The selfie lens I was a little bit less impressed with kind of over softened my face, especially when you go into live focus mode, and it missed the edges quite a bit. So it wasn’t that great.However, the rear light focus mode was much better, fantastic edge detection, and then we got to the macro lens, which is completely useless. It doesn’t have autofocus.

We can switch between lenses; if we zoom out, we seamlessly switch to the ultrawide, which again looks really good dynamic range is slightly less powerful.A good camera like there are different things you can do, and so Samsung it looks like is trying to do everything at once, but one of the things that they didn’t max out that we see some other mid-range phones do is the display

You guys will see that it’s a relatively loud phone; it does a pretty good job, and I don’t have any complaints. I’m not expecting the best audio quality out of this, but I was still impressed. So honestly, pretty good speakers.

Samsung Galaxy A72 Pros and Cons

It is a nice slim phone with a very long battery life, an overall pretty decent display, a pretty solid package, and a nice balance of everything you’re looking for to make it feel like the best mid-range phone 2021 in Pakistan.

You know that it’s not a flagship. However, it still has that water resistance rating, still has a good rear camera, good battery life, like everything that you are looking for, is there. On top of that, it even comes with some stuff that flagships don’t come with, like a charger in the box, a headphone jack, expandable storage, and a pre-installed screen protector.

But of course, there are a couple of drawbacks; like, the haptic feedback is not the best, the haptic motors are a little bit cheap, and they feel that way when you’re using it, and I mean, you’re going to have some bezel around the phone.

And the big one is that the processor is not the fastest. It’s not; it’s by no means slow, but you’re going to use it and know that you’re not using a flagship, so guys, that’s what I have to say about the Samsung Galaxy A72.

If those drawbacks are not concerning to you, I would highly recommend getting this phone; it’s less than half the price of the S21, and it delivers a lot of what I wanted to see, so I was happy with this. You have to cut costs somewhere so for anybody who doesn’t care about if you’re not playing games you’re not doing anything like that this phone could be a fantastic phone to buy.