After spending more than a week with the Samsung Galaxy S22 Ultra, I discovered 23 surprising features that you definitely aren’t aware of! Everything from camera techniques to display   recommendations to battery life suggestions is covered here. 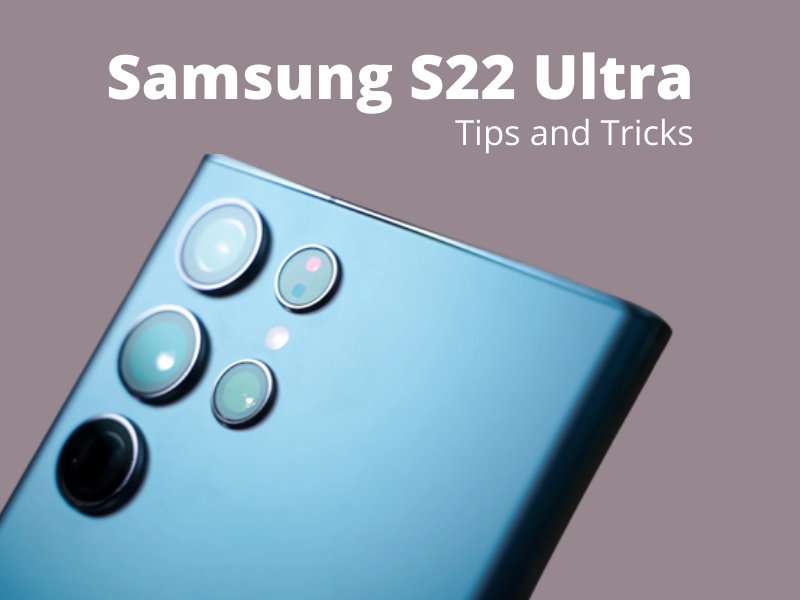 The S22 Ultra features a hidden emergency mode that you can enable in the settings, which will put the phone into an unique mode once enabled. This mode essentially disables all of your apps and background activities to save battery life. It also gives you direct toggles to the torch and an emergency alarm, both of which are quite loud. You can also make a phone call, share your location, and access the internet browser, and of course, you have a big red button that will actually call the emergency services when you need them.

I got black model one myself, and despite not putting it anywhere near my keys or avoiding any rough surfaces, it got permanently scuffed in just a few days. I’m currently testing another black unit to see if the issue persists, but given that our S22 Ultra also got scuffed, though not nearly as badly, it’s safe to assume that phantom black model is the most sensitive colour option. To avoid this issue, you could go with a lighter model such as white or grey.

Your menus, quick toggles, and even app icons can now match the colour of your background if you want even more customisation.

There is a hidden way to activate beast mode on your Samsung Galaxy S22 Ultra, giving you access to features that aren’t available by default. All you have to do is download the good lock app from the Samsung Galaxy Store and install some tools that can completely change the way you use your phone, such as lockstar, which allows you to customise your lock screen in pretty much any way you can imagine, or quickstart, which allows you to customise the quick panel.

You know how people joke that you can just download more RAM? Well, the S22 Ultra actually supports it. Because of how fast it is, you can use part of your internal storage as RAM. By default, you’ll be using 4GBs of storage as RAM, but you can increase this to as much as 8GBs. However, in my experience, this made no difference because 12GBs of RAM were already handling multitasking without any issues.

Upgrade to the 256 GB Storage Model

In case you didn’t know, the base model only comes with 8 gigabytes of RAM; if you’re on 12, you’ll need to upgrade to the 256 gigabyte storage model, which I strongly advise you to do now that the SD card port has been removed.

Samsung has aimed to deliver a pretty cool experience with the S22 Ultra xs models, in that it never really gets hot, but as a result, overall performance is noticeably lower than on the snapdragon models. If you want to balance things out, there is a performance mode that you can enable, and it can actually make a difference in games or high intensive applications.

Samsung claims that its display can reach 750 nits of brightness, making it the brightest smartphone display available. However, you must manually enable this setting by removing auto brightness and enabling additional brightness first.

There’s another display setting for it to be especially dim at night, excellent for reading in bed without the display dazzling you. It’s called extra dim, but remember to turn it off during the day because it can reduce the maximum brightness your device can achieve.

Be Careful About Sim card

If you’ve just received your new Samsung Galaxy S22 Ultra and are going to enter a new SIM card, be careful not to poke the microphone hole, which is just next to the sim eject hole.

If you want to take your photography skills to the next level, you can now download the expert raw app from the Samsung Galaxy Store. It’s a free app that allows you to take 14-bit raw photographs with all lenses, which, by the way, allows for some pretty spectacular editing.

I recently went to an aquarium and whenever I tried to focus on some up close fish my photos ended up being quite blurry so in cases like this, I would advise you to switch to the main module or the 3x module which can focus at much closer distances and then zoom in digitally once you’ve taken the shot as it would actually look much better that way.

When I was taking photos with the main module, I noticed that it took a long time for the shot to be taken. This is because it has a lot of data to process from that 108 megapixel sensor. The best way to speed up this process is to make sure that the 108 megapixel mode is disabled, and if you’re taking photos in low light, make sure that the automatic night mode is disabled as this will make your photos look even fuzzier due to the longer exposure time.

If you wish to swap between the primary, Ultra wide, and two telephoto modules while recording video, make sure 4k 30 is selected (it won’t work in 4k 60), and you’ll be able to fluidly switch between all of the lenses while shooting video.

In the camera app, there’s a mode called director’s view that allows you to record and move between all cameras at the same time, which is ideal for someone like a YouTuber who wants to be in the picture while simultaneously being able to flick between all perspectives and see what’s going on in the scenario.

Differences Between 45 Watts and 25 volt charging

The Samsung S22 Ultra does support fast charging thanks to a new 45 watt charger that you can purchase separately, but the differences between 45 watts and 25 volt charging, according to one of my friend from the lover of tech reviews, are so minor that you’re better off just getting the 25 watt charger instead.

On to some actual S-pen advice. You can change the way your s-pen menu looks from standard to compact, activate the s-pen sound, enable support for multiple s-pens, and get an alert when your s-pen is left behind by going to the settings and advanced features and then to s-pen.

If you want a different colour for your s-pen, the best way to do so is to get a Note 20 Ultra s pen or even a Note 10s pen from Amazon, as the proportions are identical and it will still fit nicely. Oh, and these ones have replaceable tips in case you want to try something different.

How to Increase Battery Life in S22 Ultra

Samsung’s case choices have vastly improved this year, with the letter cases in particular excelling now that they fully cover the space surrounding the camera modules, resulting in a flat back suitable for using the S pen on a table.

One feature that isn’t exclusive to the S22 Ultra DeX is the ability to enter desktop mode when you’re connected to an external monitor and it even works wirelessly, allowing you to stream DeX to your TV and turn it into a full computer with desktop apps like Chrome and Microsoft’s Office Suite. Of course, there are a lot more interesting things about the s2 Ultra DeX.