There have been many galaxy “A” series phones in recent years, and they’re among Samsung’s most popular devices, which is no surprise since they carry Samsung’s name and strike a good balance between price and features.

In 2021, the galaxy A52 might even outshine its siblings because it struck that balance perfectly. So, if you’re looking for a mid-ranger, is this the one to get. 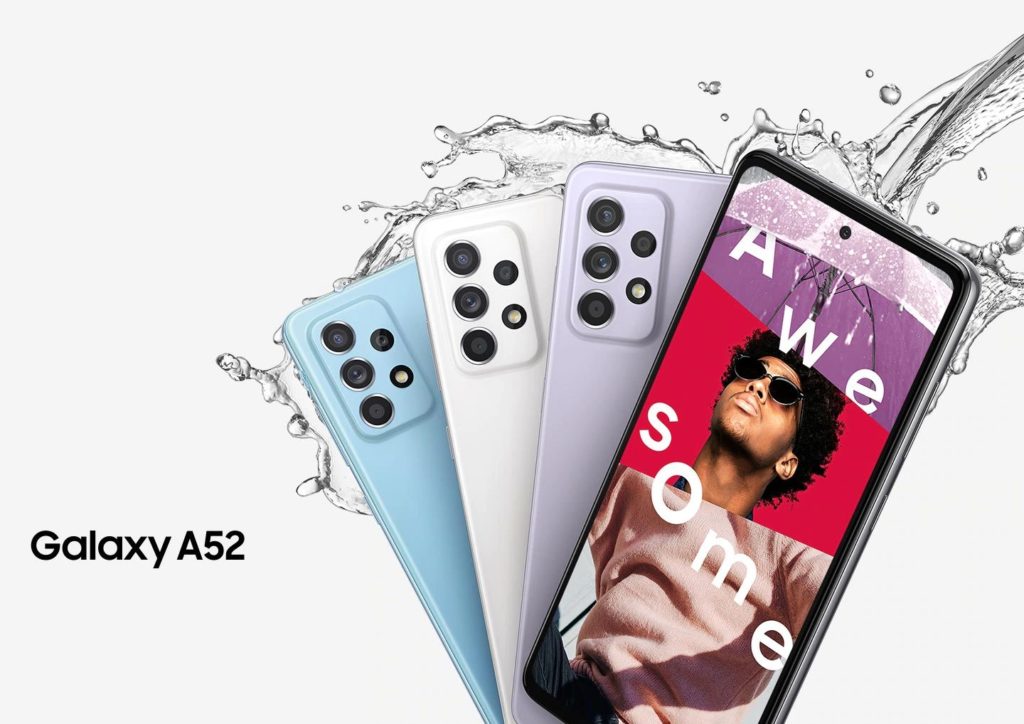 The Samsung galaxy A52 has a new design and excellent speicifications, it’s got a plastic back and frame, but it’s high quality. So, it doesn’t feel cheap. The non-reflective finish on the back is soft and silky to the touch, and the color is solid candy violet Samsung is calling it Awesome Violet.

The galaxy A52 has gorilla glass 5 on the front and IP67 dust and water-resistant, which is nice to see, especially mid-ranger.

Some pretty thick bezels give away the phone’s price segment and a small hole punch centered close to the top of the frame on the front.

An under-display fingerprint reader is consistent and reliable though a bit sluggish for today’s standards.

The screen is a 6.5 inch AMOLED panel with a Full HD resolution and a 90-hertz refresh rate. This year in 2021 marks the first time high refresh rate screens are included in the “A” series, and all of the new phones in the lineup have it. 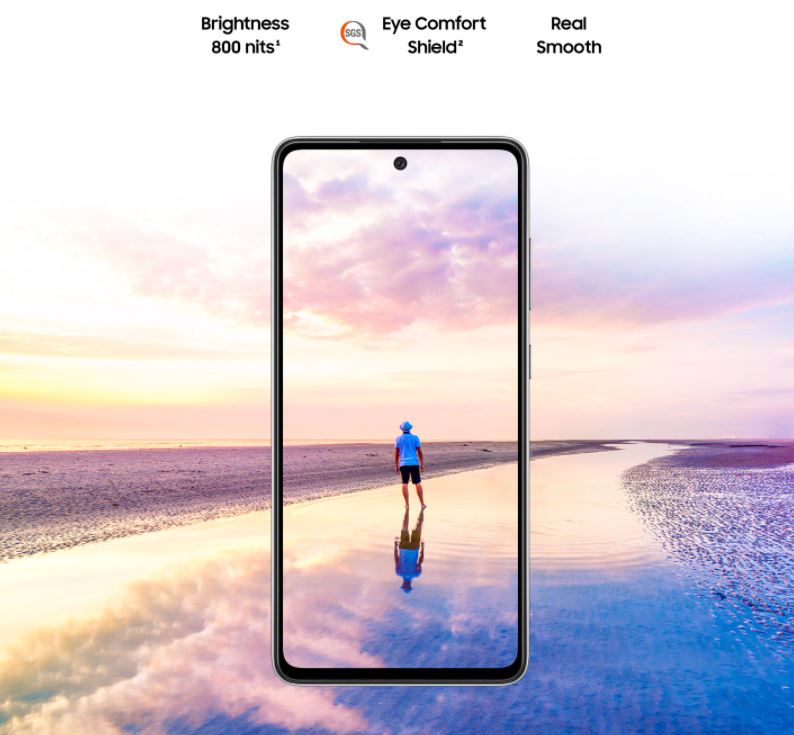 90 hertz is an entry-level high refresh rate, especially with 120 hertz becoming more common, but you’ll still get a smoother experience while scrolling.

Samsung doesn’t seem to include an adaptive refresh rate option. So, the phone will stick to 90 hertz most of the time; most apps run at this higher refresh rate, but we were most curious about games with performance optimization and Samsung’s game launcher. We got some titles like Alto’s Odyssey to take advantage of the panel. So, for lighter titles, you’ll be able to enjoy the 90 hertz.

The screen is brighter than the ones in the past. We got a very good 800 nits of max brightness on our tests; colors are also excellent on this phone, and you get to choose from the default vivid mode or natural mode; the latter can be considered perfectly color-accurate too.

Samsung has also included an eye comfort shield that adapts the colors during the day and reduces blue light in the evenings. Unfortunately, the panel lacks HDR certification though it has wide vine l1 support, so Netflix can properly use the full HD panel; watching videos on this phone is even nicer.

Thanks to the stereo speaker setup, it uses a bottom-firing regular speaker and the earpiece as a second channel; it’s not the loudest speaker out there by any means, but it scored a good loudness score on our tests.

The phone also has a Dolby ATMOS implementation which optimizes certain sounds depending on the media. You’re enjoying the sound of footsteps in a game. The phone also includes a 3.5-millimeter headphone jack if you’re not a fan of Bluetooth. 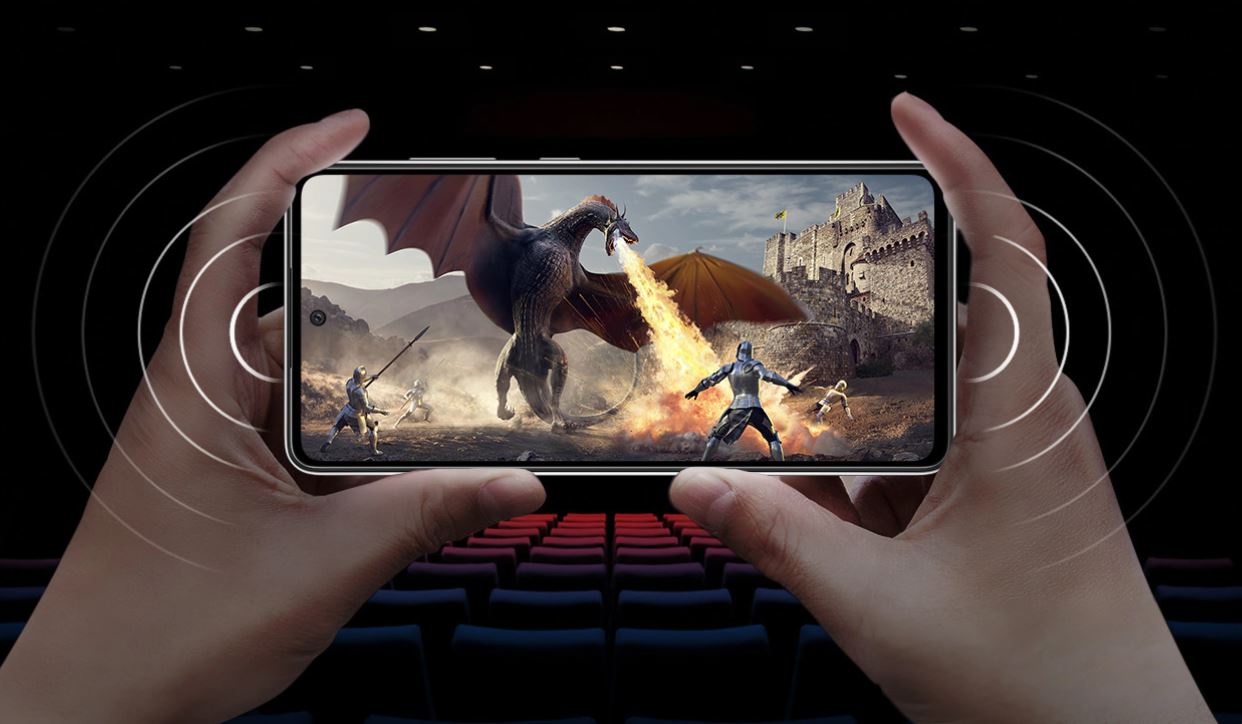 With the 4500 milliamp-hour battery, the phone scored a respectable 105-hour endurance rating on our tests with the 90-hertz refresh rate, switched on with it in the 60-hertz mode, endurance increased 108 hours which isn’t that much of a difference. So, you’re better off sticking to the higher refresh rate; the one exception would be videos that don’t take advantage of high refresh rates.

Anyway, the phone ships with a 15-watt charger in the box that can get it from flat to 34 in half an hour; that’s not too bad, but the A52 also supports 25watt fast charging, which brings it from Zero to 52 percent in half an hour instead, the only downside is that you’ll have to buy the higher watt charger separately.

The phone sports a snapdragon 720g chipset with 8GB of RAM. More importantly, it flies through day-to-day tasks smoothly and offers more than enough performance for all but the most demanding users.

The Galaxy A52 is launching with Android 11. One UI 3.1 on top of Samsung promises three major OS updates and four years of security patches, which speaks volumes about the phone’s potential longevity. When UI 3.1 isn’t vastly different from one UI 3.0 or even 2.5.

There are some design changes like the default lock screen shortcuts, which are now monochrome. Some functional like a well-being widget on the lock screen, which keeps track of how much time you spend on your phone.

The notification shade now covers the entire screen even if there is no notification card to be found. The quick toggles can edit directly instead of going into the menu.

More useful is the notification history, which is excellent for those times, you’ve accidentally dismissed a notification too quickly and can’t find what it was about.

One UI also adopts android 11’s bubbles and lets you turn incoming message notifications into conversations to minimize a bubble.

Samsung’s music share is also present, which is great to see; it allows you to play music through the Bluetooth accessories connected to a friend’s Samsung phone.

Permission handling has also changed in One UI 3, and now you get a new prompt for permissions every time an app requests it. The settings menu has also had a design change.

Recent searches are shown as bubbles instead of a list. You can now search for settings by using hashtags which saves you from hunting endlessly throughout the menu.

Even the dialer has some cosmetic changes, and you get to pick from two layouts for the in-call screen. Other than that, you’ll find Samsung’s classic edge panels Bixby and the game launcher. The only thing not included is dex, but you can still use the link to windows feature for better PC integration even with it absent. As a whole, the camera UI is the same as in other galaxy phones.

Still, Samsung has also included a new fun mode. It’s a collaboration with Snapchat that naturally puts some ar filters for both photos and videos in the native camera app. It requires an active network connection to work. Unfortunately, you won’t be able to save your favorite filters since Snapchat periodically changes them.

As far as the cameras themselves are concerned, the galaxy A52 has a 64-megapixel quad Bayer main snapper with OIS, a 12-megapixel ultrawide camera, a 5-megapixel macro cam, and a 5-megapixel depth sensor; this is pretty standard for most modern mid-rangers.

During the day, photos are decent enough though unremarkable detail is plenty. The dynamic range here is wide enough, and colors are lively without being oversaturated. There are higher levels of noise and noise suppression artifacts, though, which is unusual for Samsung. The phone also has a scene optimizer, which can be sluggish and doesn’t make a massive difference for the most part. All the same, it saved the occasional.

There’s a lot of extra softness visible those shots are usable. At 4 times and 10 times zoom. However, they have even more softness and sharpening artifacts, so we would just avoid them. 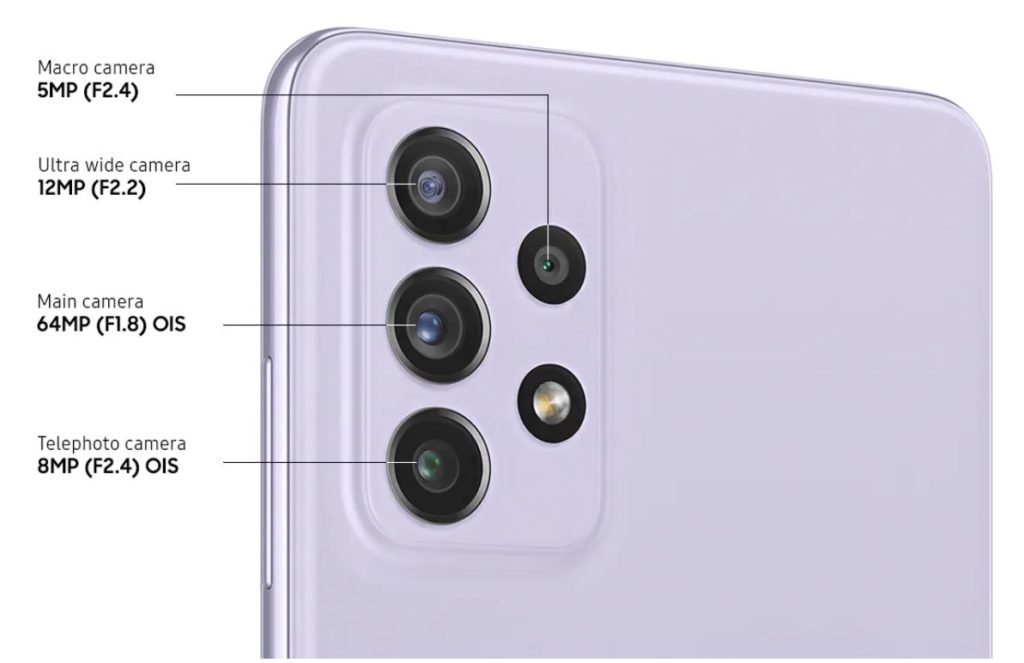 The ultrawide camera captured 12-megapixel snaps. We saw a lot of extra softness around the frame. colours’ edges are less saturated and lively than the main cameras. The overall palette is colder still; it delivers solid performance for the class.

When the light gets low, The Galaxy A52’s main camera performs very well for mid-ranger nighttime photos with excellent definitions and low noise.

Colors are well retained, too, and the dynamic range is impressive, especially if you look at how highlights are rendered night mode. However, it wasn’t delightful.

First, the photos come out with a crop to 12 megapixels meaning they’re not as wide, and in most images, highlights got clipped, and shadows got darker compared to the regular auto mode.

It’s the first time we see a night mode that makes the nighttime photos worse, especially from Samsung.

Nighttime zooming into two times is quite possible too. Night mode makes things worse, so you don’t want to use that; we were pretty pleased with the photos the ultrawide captured at night, too, especially for the class. The color rendition is excellent and even though there is visible noise upon close examination.

This camera punches above its weight here night mode in the ultrawide was an even bigger flop than on the main camera. Not only were highlights clipped, but you could easily see glaring colour artifacts that rendered the photos unusable. We think Samsung dropped the ball with this one.

Portrait mode is good but not impressive. The background blur is natural and convincing. It doesn’t go overboard; subject separation did trip up on occasion, especially with more complex backgrounds or crazier hair. Honestly, we expected a bit more from this phone especially considering the 5-megapixel depth sensor.

On the other hand, macro shots are impressive; while there’s no autofocus, it has a wide focus plane, and photos came out nice and detailed.

The 32-megapixel camera on the front snapped 8 megapixel stills selfie quality is solid with plenty of detail, and decent noise performance skin tones can be inconsistent. However, there’s also both auto HDR and the scene optimizer for better dynamic range.

Selfie portraits are surprisingly pleasant in that both the bulky and subject separation was quite lovely. The galaxy a52 can record videos at up to 4k at 30fps on the main camera, the ultrawide.

The selfie camera from the main cam detail was excellent, and the processing was fairly natural noise was non-existent. The dynamic range was wide; the colors were great too. The videos had natural color reproduction, actually, as a whole.

If you drop the resolution to 1080p footage from the main camera suddenly has a lot of extra noise. so we stick to 4k.

Video stabilization is available for both cameras but only at full HD. The general stabilization does a decent job of smoothing out jitters and handles pans well. There’s also the option of super steady mode, which gets the video feed from the ultrawide camera.

The galaxy A52 is the only phone in this price range with a high refresh rate and an IP67 rating. So if those are your priorities, you have your answer about whether you should get this phone. Suppose, however. You want a more powerful chipset or a better camera setup. In that case, you have some other options to consider, namely the POCO F3 or the Redmi Note 10 pro, respectively; the Redmi K40 pro might be its biggest competition.

My finding about the Samsung Galaxy A52 review

Thanks to a more powerful chipset, a display with an even higher refresh. Most importantly, you should know that Samsung has done an excellent job with this phone. So if you’re considering mid-rangers, this one should be on your list.