Don’t confuse the Nokia 7.1 for the Nokia 7 plus, which came out a few months ago, and This is a slightly newer model. one of the first things you notice is his style; just like his predecessors, it goes for a straight-edged look instead of a curvy one.

The edges of the 6000 series aluminum frame are beveled rather than sharp, though. they look pretty snazzy with their chrome highlights which also accent the power and volume keys and the rear cameras.
The phone’s back is a flat glass panel, unlike the metal build we’ve seen on some recent Nokia’s. It will wobble when sitting on the table thanks to the camera bump.
The phone feels pretty slim in hand; it’s not uncomfortable but a bit slippery, so be careful around the pool this phone doesn’t have water resistance. 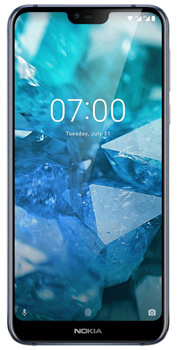 On the front is a 5.8 4-inch 19 by 9 IPS LCD, and this screen is one of the more exciting things about the Nokia 7.1. the new feature is that the 1080p display is HDR 10 compliance is one of the cheaper options available if you’re looking to watch HDR content on your phone.
They were able to achieve HDR compliance on an LCD by using dynamic contrast. You can enhance your SDR content to get HDR light quality, and there is a noticeable difference in the highlights and shadows. It’s small but is there.

Unlike the Nokia 7 Plus, this phone has a notch cut-out similar to the Nokia 6.1. the result is a slimming of that top bezel and a more edge-to-edge experience, but when watching content or playing a game, that whole part of the screen will be left black with no full-screen apps here.

We measured up to 600 nits max brightness in auto mode in bread conditions, but it did only average in our sunlight legibility test. It’s kind of usable in the Sun, but it’s not a comfortable experience.

There is a feature called ambient display, sort of like an always-on display, but it only wicks up when you lift the phone, or a new notification comes in. There is no notification. I wonder why you’d raise your phone to check the ambient display if you could unlock with the same motion using face open. It seems to work pretty well, but it does require a swipe motion after it recognizes you.

It’s also not as secure as a rear-mounted fingerprint scanner; the scanner is quick, accurate, and always ready to wake up the phone.

For audio, there’s a single bottom-firing speaker by the USBC port. It’s no stereo setup, but it gets pretty loud and sounds decent. Plugging in headphones is simple, thanks to the 3.5-millimeter jack up at the top. The sound is ok, but the loudness is below average. I am disappointed that there is no FM radio option either.

But since storage is expandable via the hybrid slot, you can’t afford to keep a decent media library directly on the device.

Inside the Nokia 7.1 is Qualcomm’s mid-range Snapdragon 636 chipset in either 3 or 4 gigs of ram. It doesn’t top the benchmark charts but has pretty good performance for its class that said don’t expect anything is blazing fast.

The battery life of the 7.1 is decent is powered by a 3060 million power battery. Rating of 80 hours, kind of an average score but far from disappointing.
The 7.1 also supports 18-watt fast charging, and the supplied charger fills about 45% of the depleted battery in 30 minutes. There’s no wireless charging, though.

One of the best features about Nokia phones these days is that they’re all a part of Android 1 the 7.1 runs on vanilla Android Oreo 8.1 and will receive on-time updates for the next couple of years, starting with a switch to Android Pie in November you get the standard Android 8 home screen with a pull-up app drawer everything feels simple and fluid.

The quick toggles and notification shade change color depending on the wallpaper you choose. White for lighter ones and black for darker ones

One interesting feature at the navigation bar and area around the Nagy turns red when you’re low on battery.
As for multimedia, it’s all in the hands of Google’s app. Suites photos are in charge of your gallery and video playback, while Google Play Music is the audio player of the Nokia 7.1s.

The Dual-camera setup has a 12-megapixel primary can with an F 1.8 Zeiss branded LAN and dual pixel autofocus; the secondary 5-megapixel snapper is just for death sensing to provide better bokeh.

The camera app on the Nokia 7.1 is practically the only custom app, and it’s been improved since the previous Nokia phones, you can swipe to switch between different shooting modes, and the selfie camera switch is easier to reach when shooting in daylight.

We found that leaving on the multi-stacking auto HDR gives us the best results it works well and boosts the dynamic range in contrast at the expense of some sharpness and fine details, but the level of detail is still good; the exposure is even, and colors are vibrance.
Opting out of the auto HDR means that the photos are captured and saved a bit faster, and while they lack the dynamic range of the HDR ones, they have more and sharper intricate details. It’s not a significant improvement, though.

The Nokia 7.1 lacks OIS, and the bright aperture is all it has going for it. In the dark low-light photos are nothing impressive, even a bit below average. They come out soft and blurry while the aggressive noise reduction smears much fine detail, and auto HDR doesn’t affect.
The portrait mode, on the other hand, is pretty impressive, especially for a mid-range device.
The death mapping is well done, too, with gradual blurring of different objects based on distance. The selfie camera is 8 megapixels with an F 2.0 lens. There’s no autofocus, but the focus plane is a reasonable distance away from the phone. It works out ok selfies with natural skin tones in an overall pleasing color rendition.

There’s 4k video recording available on the Nokia 7.1 and 30fps. It’s sharp primarily except for in areas that contain a lot of fine detail. Colors are true-to-life, contrast is excellent, and there isn’t much noise; the dynamic range is above-average to the 1080p clips similar to quality.
They hold up a bit better against the competition. The field of view is narrower though due to the always-on electronic stabilization one other thing to mention is that recorded audio sounds excellent on this phone. Thanks to Nokia, it’s also a technology one so nice, so that’s the Nokia 7.1 overall is one of the better Android one smartphones.

It’s got a great HDR display, decent performance, and nice sized branded camera, especially if you like portrait mode, but the mobile price in Pakistan isn’t too bad at around Rs 33000. it’s not the best bang for your buck you can find there are phones in this price range looked at Huawei Y7A phone that is bringing much more powerful chipsets and big batter 5000 mAh.