Almost 6 months later after the release of the Infinix 10, Infinix has just released a brand new android smartphone in the HOT series “Infinix Hot 10 play” featuring a bigger and better battery performance with a massive 6000 mAh battery and also features the Mediatek Hello G25 (HOT 10 Play) and G 35 (HOT 10 Play 4GB) processors, a 6.82 IPS display, XOS 7.0 based on android 10 GO and many other features.

It is made of a polycarbonate plastic material quality is just what we would expect from an entry-level phone and yes this is a cheap phone the Infinix certainly has a beautiful back design with textures that we saw on the Smart 5 and Hot 9.

It comes in 4 color options Aegean blue, Morandi Green, Obsidian Black all of which show the same texture pattern on the back. 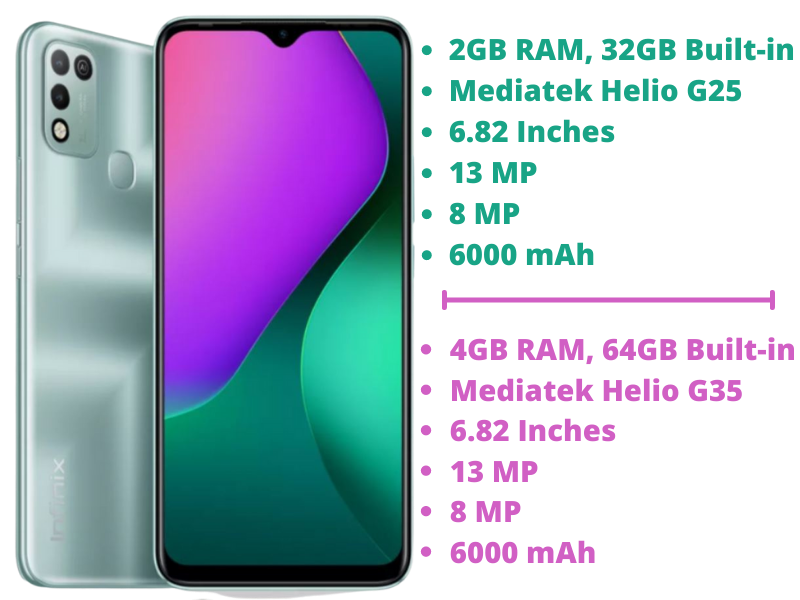 On the right side of the phone are the volume rockers sitting just above the power button.

On the left side of the device is a dual sim and memory card tray with support for 4G sims.

At the bottom edge, you get a headphone jack a micro USB 2.0 port, a microphone but this device doesn’t have a loudspeaker it gets all its sound and audio produced from the sound playing earpiece.

On top, it is only allowed for talking or podcast audio media consumption but not music.

The roof of the device is clean even though the device feels cheap because of the materials used and the finishing of the paint job.

The phone will be very good for consuming media content well while I found it not disappointing at all. I still don’t think it’s that very good with plain media content to get the title video playing display. you still get the over-sharpening effects expended in budget or entry-level phones such as this the display has an aspect ratio of 20.5:9 and a screen to body ratio of 90.66 perfect for one-hand operations and handling there are a waterdrop notch and a big button bezel which some might find unpleasant but it’s a budget device starting from the Infinix note 7.

Infinix has opted for the more powerful Helio G series of processors compared to the ones they are used to like the Helio P-22.

Infinix Hot10 Play has a better GPU and CPU performance and it has a hyper engine technology which Infinix says helps reduce game lags effectively by switching between networks to give you the ultimate gaming experience overall system navigation is decently smooth with few hitches of course I wasn’t expecting so much from this device however I played Call of Duty mobile on this device and clearly this device is not made for power or gaming I experienced plenty of lags and frame drops while I think the G25 chip is a major improvement from the A25 chip on the Hot 9 and other mainstream devices from Infinix. I feel it’s still not enough to deliver a decent and fluent mobile phone experience on a budget. this could be because of the small RAM size on it, the Infinix HOT 10 play has 2GB RAM and 32GBs of internal storage which is enough to keep some of your apps in the background and give you little room for storing your stuff is not enough for you.

Infinix HOT 10 play packs are 6000 milliamps super battery that is quite large in their price range it also supports the new power marathon tech designed by Infinix to help you get more out of your battery life.

on a single charge, power marathon has 2 battery saving modes that can be enabled from the device settings you can choose to enable power boost which systematically reduces battery usage over a long period, or chooses the ultra-power mode which can give you up to 2.7 hours of call time with just 5% battery.

there’s a 13 megapixel 2-megapixel dual rear camera system plus an 8-megapixel front camera, and talking about the camera or picture quality honestly, I think there is not much to say considering the cost of the device and its target audience. Pictures are what you would expect from an entry-level Infinix device under ideal light situations. Pictures from the rear camera are decent and sharp but the shutter speed is low.

There are so many XOS features that are missing in Infinix HOT 10 Play maybe because this is an entry-level device or maybe it is running on the GO version of android or maybe the processor may not be able to carry or power all those features and it has been retailed at about Rs. 15299 for 2GB variant and 4GB at Rs 18,999 in Pakistan.

Its battery capacity (6000 mAh) is very good so you will not have the problem of mobile charging again and again. the second advantage is that Infinix Hot 10 Play has 6.82 Inches video display and the result of the video in Hot 10 Play is very impressive which will make you have a lot of fun. Its fingerprint sensor is also a quite good, fast, and accurate fingerprint sensor. It doesn’t look cheap at all.